Watch it on YouTube! The participants on the podium have been recorded. May 8, 2021 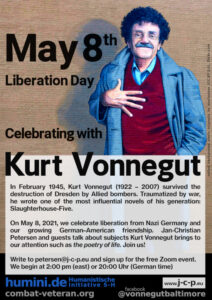 Click the image to view the invitation card. The event was held in English.

What is Liberation Day?
On May 8, 1945, the German Wehrmacht surrendered, which marked the end of World War II in Europe. It was a turning point in our history that paved the way to a humane and democratic society. On May 8, 2021, we celebrate liberation from Nazi Germany and our growing German–American friendship.

Background: In 2020, Liberation Day became a day of remembrance recognized by the government of the German state of Schleswig-Holstein. All 20 events can be found on www.achter-mai-sh.de

Celebrating with Kurt Vonnegut
In February 1945, Kurt Vonnegut (1922 – 2007) survived the destruction of Dresden by Allied bombers. Traumatized by war, he wrote one of the most influential novels of his generation: Slaughterhouse-Five.