The end of the Second World War is deeply embedded in our collective memory. On May 8, 1945, the Wehrmacht surrendered. Due to our history, we Germans have a moral guilt and responsibility for peace and friendship today. But facing the war in Ukraine, thoughts and feelings about liberation took on a new dimension. For May 8, Jan-Christian Petersen and the Humanist Initiative have sent out an open invitation to encounter what people of the past and present have experienced:

Please check your browser settings, if the YouTube video is not shown or if it doesn’t work.

Barbara R. Grabowski is a singer. Her father Kazimierz, who fought against the Nazis in the Warsaw Uprising, was deported to Salzgitter in Germany as a forced labourer. In April 1945 he was liberated by the Americans. In her music video, the singing lecturer honors her father, who died in 2020 at the age of 95.

“My father was born in Warsaw in 1925. As a young man he fought against the Nazis. His brother died with the partisans. My father himself was shot during the Warsaw Uprising. He was arrested and finally deported to Germany as a forced labourer. There he had to slave away in the steelworks of Salzgitter. He told me stories that were always difficult to imagine and hard to digest. At night, the forced labourers sabotaged the equipment. Those who got caught were hung by the Nazis from the ceiling above the conveyor belt, where they were exhibited as deterrent. My father was lucky. At some point he was also allowed to work outdoors, where he met other Germans, people who threw an apple or a piece of bread over the fence. On April 10, 1945, he was liberated by Americans. At least that’s the date in his stories.”

Barbara R. Grabowski lives in Mannheim, Germany. She is part of the Salon Collective. It consists, among others, of the duo LABOR:HACE, who provided the image material in the video above. Barbara’s own Trio Kalliope is also part of the collective. In the video, the three artists perform a song by Johannes Brahms with lyrics by Klaus Groth.

Ukraine – Liberation from war is what we wish!

At the end of February 2022, opinions similar to those in the New York Times could be found in all US media. „Some people are still behind the ‚Berlin Wall,’” comments Natasha Butler from Baltimore, Maryland, USA, in regard to her artwork below. Natasha has Russian roots. „Not everyone managed to cross the mental and political ‚Berlin Wall'“, emphasizes the analyst, who works in public service. “My mom grew up in a small Ukrainian village, and her mind is deeply set on the other side of that mental divide. Young Ukrainians, and many Russians as well, long to live in the western mental environment and with great hope direct their gaze through whatever gaps in the ‚wall‘ they can find.“

Natasha Butler; „Some People Are Still Behind The ‚Berlin Wall'“; Baltimore, Maryland, USA; 2022 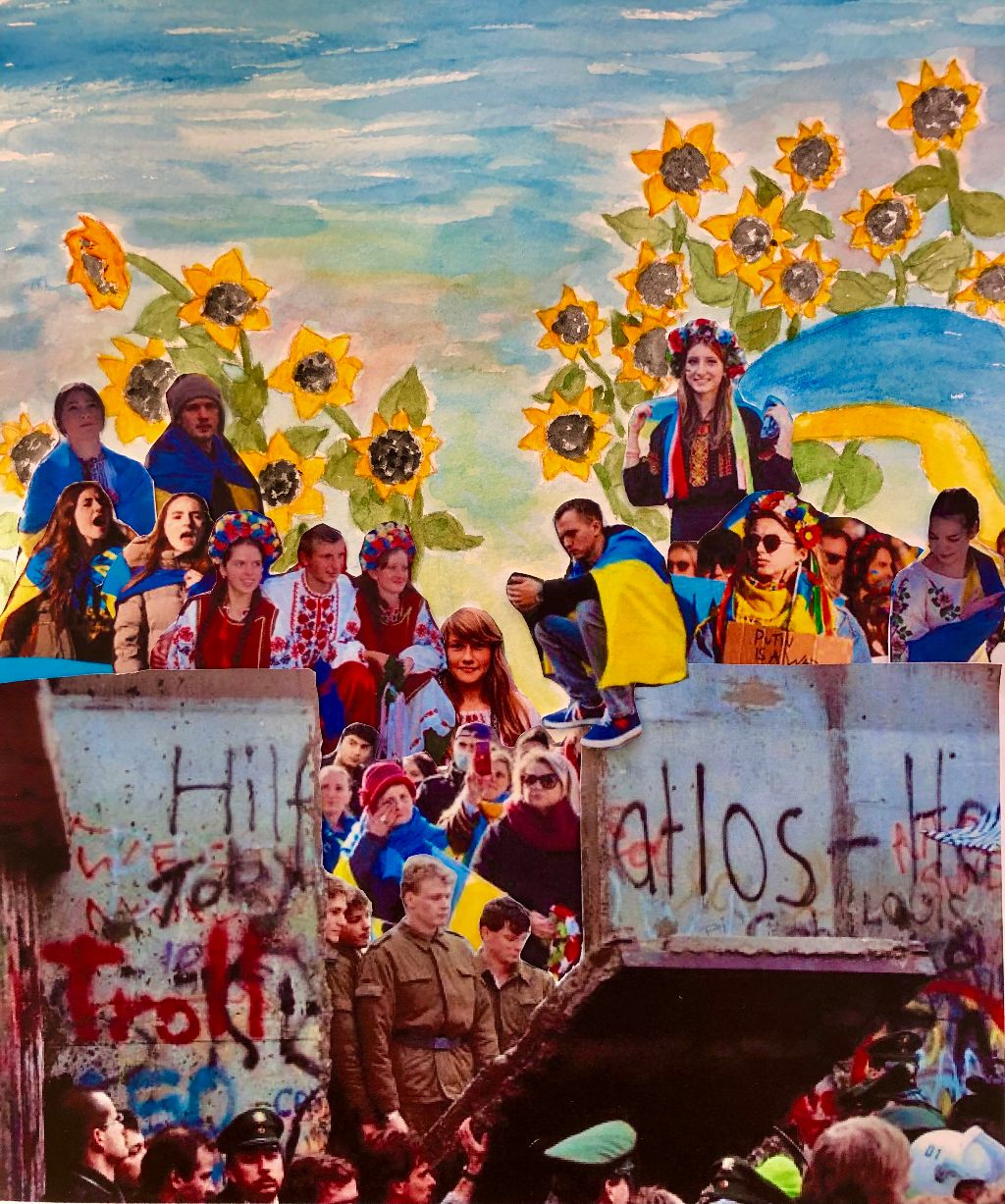 Dorothea Ginolas‘ art is dedicated to children on the run as described by Unicef in a German newspaper article. Dorothea is an illustrator and author from Uetersen, Schleswig-Holstein, Germany. She already dealt with the flow of refugees in Germany in 1945 and with the Syrian exile of 2015 in her children’s book „The Story of Samira and Lotte – a story about flight and arrival“. Today, she focuses on the suffering that Ukrainian children have to experience: 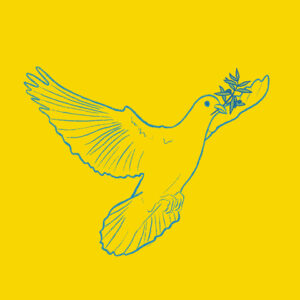 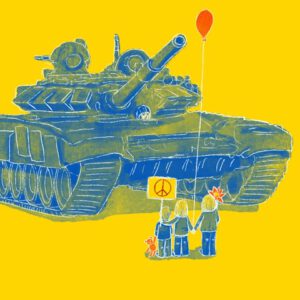 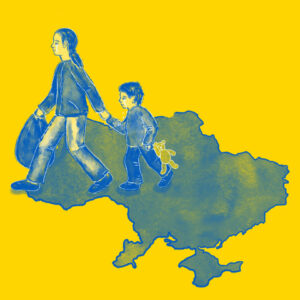 Mark C. Marino has been writing an ongoing webcomic with his family since 2020. When Russia attacked Ukraine on February 24, the family captured in real time the rupture in people’s lives but also the economic impact. Mark is head of the Labor for Humanities and Critical Code Studies at the University of Southern California. He got the idea for the webcomic during the Corona outbreak in order to counter isolation.

Click on the images to enlarge and browse or use the dot navigation for browsing.